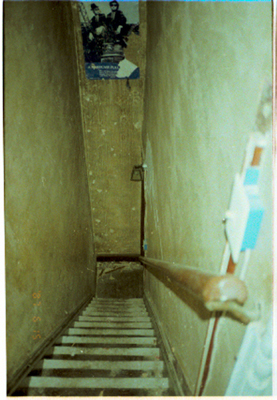 If you’re a stickler for historic accuracy, then you might not like the project we just completed. What we did was improve the back staircase in our house. If we wanted to be absolutely true to the way our house was built 116 years ago, then we would have left it just as it was, right?

Most Victorian houses of a certain size (like over 4,000 square feet) have staircases at the back (and inside) of the house. These were for the servants, back in the days when middle class families could afford servants. These staircases were usually narrow and gloomy because the homeowners never used them. The servants’ staircase in our house was a perfect example of this. Wow, was it gloomy!

When we got the house twelve years ago, all we did to the stairway was stabilize it, painting over the wallpaper and plastering here and there to keep the walls together. Then we painted the stairway hallway, which was hard to do because the ceiling rises nearly 20 feet over the stairs. It was such a difficult space to work in, we avoided dealing with it for, well, 12 years. But, then, finally the wallpaper started peeling both from the ceiling and the walls and Ron got fed up. One day I found him scraping off the wallpaper, propped on two ladders in order to get to the ceiling. I said, “You’re crazy.” And he said, “Start looking for lights online — let’s see if we can brighten up this space.”

It turned out to be a huge job. Once Ron started stripping the wallpaper, he had to keep going, stripping if off the entire second floor ceiling (down the hallway). Then he stripped the walls from floor to ceiling in the stairwell. Then he patched and plastered. Then he had to run new electricity because I, the designer, insisted that we hang a big light from the very top of the ceiling and put two sconce lights in the hallway. Ron went on and wired a fourth light on the landing. In the end, we filled the once-gloomy hallway with splendid light. This was a big deal for us because we use the back stairs ALWAYS and rarely use the front stairs.

The finishing touch wasn’t the lights but the wainscotting I requested. As usual, I wanted more work than Ron wanted, asking him to install beadboard on both sides of the hallway all the way up. He did a great job of it. And the test of how it looks is that you can’t tell that we just put it in. It looks like it’s been there since the house was built. Now we have a pretty back staircase that makes us feel good when we walk up and down it so many times a day.

So this brings us back to the restoration issue. We didn’t really “restore” the servants’ stairs. But we didn’t wreck them by improving them either. We look at it this way: if the original builder of our house had wanted to, he could have improved the back stairs just the way we did. Everything we used is era-appropriate, right down to the beadboard. It’s just like working on a vintage kitchen: who says you can’t upgrade it and still stay true to the spirit of its time period?