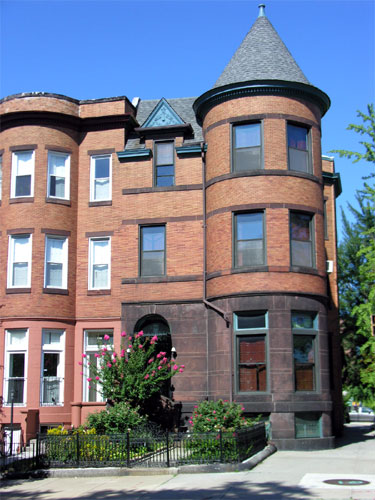 Our neighborhood — originally named Peabody Heights — was an early experiment in suburban amenties. Each rowhouse featured a small plot of grass out front. Apparently, this was guite a luxury. Even the best houses downtown fronted directly onto the sidewalk. As you see from the 1936 photo, there were no plantings. It seems the grass was statement enough.

When we first bought the house, it had a huge bush growing in front of the bay. We removed the bush and beat down the weeds but were disatisfied with the look of yard.

In 2007, when we learned that THIS OLD HOUSE magazine would be visiting us, we scrambled to make something of the front yard: we uprooted the grass, bushes and ivy, then planted a crepe myrtle, two beds of roses and other perennials. Then, we put in a cast iron fence. The fence is a reproduction, made to look Victorian.

We painted our fence in 2008. Then we added a sconce lights on either side of the front door. In 2009, as a final touch, we designed a canopy to go over the door. A local iron works company, C & S Iron, put it together and installed it.

You can click on this photo (above) for a slide show about the canopy.
Click each slide (upper right, on the photo) to advance.